Fragment 177-191 (modified version of AOD9604) is a small piece of human growth hormone (hGH) that is sometimes referred to as the “lipolytic fragment.” Fragment 177-191 earned this latter name due to the fact that laboratory research has shown it to enhance fat burning, particularly in mice genetically engineered to produce large fat stores. Fragment 177-191 has been heavily researched in animal models because even while it preserves the fat-burning effects of hGH, it avoids some other effects of its parent protein such as increasing insulin-like growth factor-1 (IGF-1) levels, negatively impacting carbohydrate metabolism, altering insulin sensitivity, increasing long bone growth, and so forth. The targeted effects of fragment 177-191 make it useful for exploring human fat metabolism and may eventually provide the basis for developing anti-obesity medications.

Research in animals has revealed that the c-terminal end of hGH is primarily responsible for the protein’s hypoglycemic (lowering blood sugar) effects. Testing of at least six different fragments derived from this section of hGH has shown that fragment 177-191 is the most effective synthetic derivative of hGH for lowering blood sugar levels. This effect is secondary to a sustained increase in plasma insulin levels. There is some interest in using fragment 177-191 as a treatment for both prediabetes and type 2 diabetes.

Fragment 177-191 has earned the nickname of “lipolytic fragment” because testing in mice has revealed the peptide to have substantial fat burning and weight loss properties. It is thought that this action is mediated through an increase in production of beta-3 adrenergic receptors (β3-AR or ADRB3). Agonist action at ADRB3 is known to directly increase fat burning in adipose tissue and is also responsible thermogenesis in skeletal muscle. Mice that have been genetically modified to produce no ADRB3 do not respond to the lipolytic effects of hGH or fragment 177-191.

Studies show that the increased fat burning associated with fragment 177-191 directly correlates with energy expenditure and thus weight reduction, leading to a nearly 50% reduction in weight gain in obese animals over a three-week course. Interestingly, the weight loss effects were seen only in obese mice, with lean mice maintaining normal body weight, on average, even when exposed to fragment 177-191. These findings indicate that there are secondary regulatory pathways for lipolysis that override ADRB3 function when body weight is at or near ideal, opening up areas for additional research into energy homeostatsis. 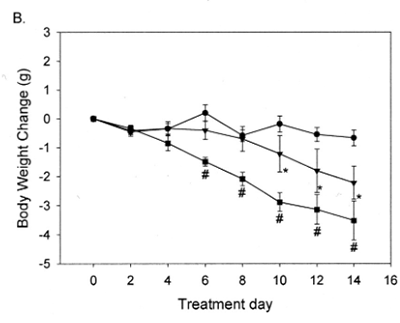 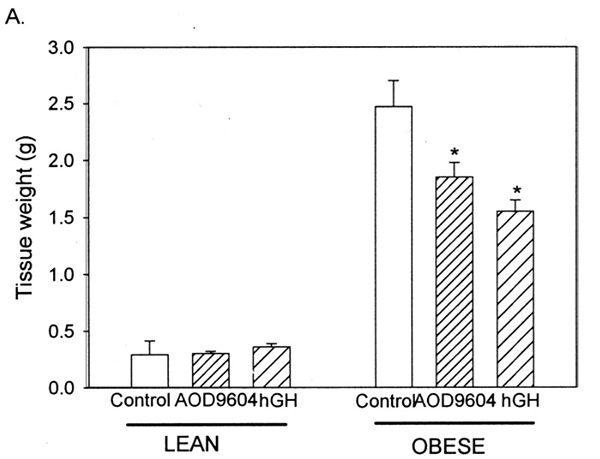 Though fragment 177-191 is primarily of interest for its lipolytic properties, the peptide is under investigation for other possible benefits. Of note, a 2015 article out of Korea revealed that fragment 177-191 may be able to potentiate the effects of hyaluronic acid injections in promoting cartilage regeneration. Studies in rabbits indicated that weekly injections of fragment 177-191 increase laboratory measures of cartilage growth and that co-administration of the peptide with hyaluronic acid (HA) produces even more substantial effects. Similarly, the study found that fragment 177-191, both alone and in combination with HA, reduces disability associated with osteoarthritis. There is hope that this may lead to advanced therapies for osteoarthritis and may even eliminate the need for surgery in certain settings.

There is some concern that the use of hGH or its derivatives for weight control may have unwanted side effects. This concern arises from the fact that studies of hGH have shown that long-term exogenous administration, while increasing lean body mass and decreasing adipose tissue, can also cause:

In 2013, a study published in the Journal of Endocrinology and Metabolism evaluated six studies of fragment 177-191 to assess the rate and significance of negative effects associated with the peptide. The study, included only research that followed the randomized, double-blinded, placebo-controlled model of a phase IIb clinical trial in order to keep the highest possible standards of evidence. It found that IV and oral administration of Fragment 177-191, when compared to placebo, led to no changes in:

The results of this meta-analysis suggest that fragment 177-191 offers many of the benefits of hGH without the associated negative (and often serious) side effects. These findings further the argument for pursuing regulatory approval for use of fragment 177-191 in the clinical setting, but also offer insight into the regulation of human growth, fat deposition, and energy homeostasis. These findings make it clear that it is possible to target fat loss without affecting energy homeostasis in other nutrient pathways, opening the door for a deeper exploration of human energy regulation and methods of manipulating it.

It is worth noting that while hGH has anabolic effects on muscle, fragment 177-191 was specifically selected for its ability to avoid anabolism entirely. This is critical to ensuring that the peptide has targeted lipolytic effects and does not produce acromegaly or any of the other conditions associated with hGH administration. Studies in mice reveal that fragment 177-191 does not increase cell proliferation).

The primary area of research for fragment 177-191 is in weight loss and lipolysis where significant effort is being expended to learn how the peptide can be used to understand fat metabolism and energy homeostasis. The most active secondary area of research is in connective tissue regeneration, particularly cartilage repair.