Growth hormone releasing hormone (GHRH) has been modified a number of times to produce analogues that preserve some of the hormone’s effects while eliminating others. One of those modifications, CJC-1295, consists of just the first 29 amino acids of GHRH. This analogue of GHRH, which is technically a maleimido derivative of hGRF(1-29), was created in an effort to produce a more soluble GH secretagogue that is easier to produce in large quantities but still preserves the physiologic actions of GHRH.

CJC-1295 is a modified version of the first 29 amino acids of GHRH, which means it is chemically similar to other GHRH analogues, like Sermorelin. It is most similar to modified GRF (1-29), but the two peptides are not identical. A great deal of confusion arises because of the similarities between these peptides and because CJC-1295 was originally created with an added chemical compound called the drug affinity complex (DAC).

DAC is added to the molecule, with the help of a lysine linker, to protect the peptide while it circulates in the blood stream. By allowing peptides to bind to the common blood protein albumin, DAC helps to ensure that the half-life of CJC-1295 is much longer than similar molecules like GRF (1-29). 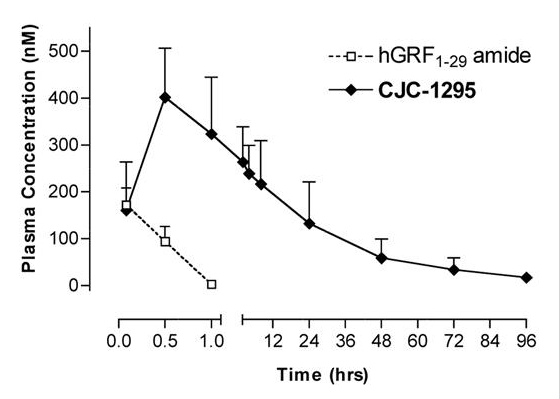 Originally, ConjuChem Biotechnologies, the developer of DAC, referred to the molecule containing DAC as simply CJC-1295. Confusion arose, however, because the peptide was also being offered without DAC. To avoid confusion, CJC-1295 that contains DAC is called CJC-1295-DAC and when it does not contain DAC it is referred to as CJC-1295 or CJC-1295-no DAC.

As a derivative of GHRH, it should come as no surprise that CJC-1295 promotes the release of GH. Studies show that a single dose of CJC-1295 increase GH levels in mice by 2-10 times. Peak GH levels are reached approximately 2 hours after administration and the effects last for about six days. Unlike other GH secretagogues, CJC-1295 preserves normal physiologic release of GH[1]. That means that the normal circadian peaks and valleys seen in GH release remain intact and that CJC-1295 is a physiologic growth hormone releasing factor.

Preserving physiologic release of GH even while influencing the maximum concentration of the hormone in the bloodstream is critical to ensuring enhanced effects without increased side effects. In particular, CJC-1295 has been demonstrated to preserve growth hormone’s physiologic effects on hyperplasia, hypertrophy, bone density, blood sugar, fat metabolism, protein synthesis, and myocardial (heart cell) function.

Studies in mice without normal GHRH physiology have shown that CJC-1295 preserves normal GH release[2]. This makes the peptide potentially useful as a therapy for abnormal growth in a variety of mammalian species, humans included. Preserving normal pulsatile release of GH is critical to ensuring that proper release of downstream hormones, such as insulin-life growth factor-2 (IGF-1).

Research from the early 1990s suggests that CJC-1295 and other GRF analogues may be useful in promoting ovulation in infertile female patients. Scientists have long known that ovulation is dependent on IGF-1 and that it is also likely influenced by GH release and cycling. Research in animal models of superovulation has helped to confirm these theories by showing that both GH and IGF-1 levels rise significantly surrounding the time of ovulation. Further, these studies indicate that exogenous administration of GH secretagogues, like CJC-1295, is enough to cause appropriate ovulation[3]. There is some speculation that CJC-1295 and other analogues may even be useful in male infertility by helping to regulate sperm production. This latter hypothesis has yet to be tested.

CJC-1295 is a growth hormone secretagogue designed to have a long plasma half-life and to preserve the physiologic patterns inherent in the GH axis. On both accounts, the molecule has been a success. CJC-1295 has experienced limited interest in research settings due to the advent of a number of similar molecules and because of the proprietary nature of the molecule’s structure. Now that CJC-1295 can be manufactured at will, there is likely to be renewed interest in its properties, particularly as they apply to the increasingly frustrating problem of human infertility.

CJC-1295 exhibits moderate side effects, low oral and excellent subcutaneous bioavailability in mice. Per kg dosage in mice does not scale to humans. CJC-1295 for sale at Peptide Sciences is limited to educational and scientific research only, not for human consumption. Only buy CJC-1295 if you are a licensed researcher.