IGF1-LR3 is a modified version of insulin-like growth factor-1. The full name of the peptide is insulin-like growth factor-1 long arginine 3. All IGF-1 derivatives play prominent roles in cell division, cell proliferation, and cell-to-cell communication. Though it has similar effects, IGF-1 LR3 does not adhere to IGF binding proteins as strongly as IGF-1. This results in IGF1-LR3 remaining in the bloodstream 120 times longer than IGF-1. IGF1-LR3 gains its prolonged half-life as a result of its structural changes. The peptide is created by adding 13 amino acids to the N-terminal end of IGF-1 and by converting the glutamic acid at position 3 of IGF-1 to an arginine residue. 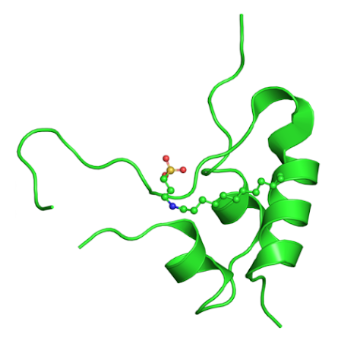 Like IGF-1, IGF1-LR3 is a potent stimulus for cell division and proliferation. Its primary effects are on connective tissues like muscle and bone, but it also promotes cell division in liver, kidney, nerve, skin, lung, and blood tissues. IGF-1 is best thought of as a maturation hormone because it not only promotes cell proliferation, but differentiation as well. IGF-1 causes cells to mature, in other words, so that they can carry out their specialized functions.

Unlike IGF-1, IGF1-LR3 remains in the bloodstream for long periods of time. This property makes IGF1-LR3 a much more potent molecule. A dose of IGF1-LR3 provides approximately three times as much cell activation as a similar dose of IGF-1. Note that IGF1-LR3 and all IGF-1 derivatives do not promote cell enlargement (hypertrophy), but rather promote cell division and proliferation (hyperplasia). In the case of muscle, for instance, IGF1-LR3 does not cause muscle cells to get larger, but it does increase total numbers of muscle cells.

IGF1-LR3 boosts fat metabolism in an indirect manner by binding to both the IGF-1R receptor and the insulin receptor. These actions increase glucose uptake from the blood by muscle, nerve, and liver cells. This results in an overall decrease in blood sugar levels, which then triggers adipose tissue as well as the liver to begin breaking down glycogen and triglycerides. Overall, this produces a net decrease in adipose tissue and a net energy consumption (i.e. net catabolism).

Given its role in reducing blood sugar levels, it should come as no surprise that IGF1-LR3 reduces insulin levels as well as the need for exogenous insulin in diabetes. In most cases, this translates into a 10% decrease in insulin requirements to maintain the same blood sugar levels. This fact may help scientists understand how to decrease insulin doses in individuals who have decreased insulin sensitivity and may even offer insight into preventing type 2 diabetes in the first place.

Myostatin (a.k.a. growth differentiation factor 8) is a muscle protein that primarily inhibits the growth and differentiation of muscle cells. While this function is important to prevent unregulated hypertrophy and ensure proper healing following injury, there are times when inhibiting myostatin could be of benefit. The ability to stop myostatin from functioning could be useful in conditions like Duchenne muscle dystrophy (DMD) or in people who suffer muscle loss during prolonged immobility. In these cases, inhibiting this natural enzyme could help to slow muscle breakdown, maintain strength, and stave off morbidity.

In mouse models of DMD, it has been found that IGF1-LR3 and other IGF-1 derivatives are capable of counteracting the negative effects of myostatin to protect muscle cells and prevent apoptosis. IGF1-LR3, thanks to its long half-life, is highly effective in counteracting myostatin and appears to work by activating a muscle protein called MyoD. MyoD is the protein normally activated by exercise (e.g. weight lifting) or tissue damage and is responsible for muscle hypertrophy.

IGF1-LR3 promotes tissue repair and maintenance throughout the body, making it a protective molecule against cell damage and the effects of aging. Research in cows and pigs indicates that IGF1-LR3 administration may be an effective solution for offsetting the effects of cellular aging. Ongoing research in mice seeks to determine if IGF1-LR3 might be useful in preventing progression of a wide range of conditions such as dementia, muscle atrophy, and kidney disease. This research reveals that IGF-1 administration can prolong life and reduce disability.

Glucocorticoids, secreted primarily by the adrenal glands, are important clinical drugs used to control pain and reduce inflammation in autoimmune diseases, neurological injury, cancer, and more. Unfortunately, glucocorticoids have a number of undesirable side effects such as muscle wasting, fat gain, and deterioration of bone density. There is some interest in using IGF1-LR3 to reduce the side effects of glucocorticoids and thus allow for more effective therapy.

IGF1-LR3 exhibits minimal to moderate side effects, low oral and excellent subcutaneous bioavailability in mice. Per kg dosage in mice does not scale to humans. IGF1-LR3 for sale at Peptide Sciences is limited to educational and scientific research only, not for human consumption. Only buy IGF1-LR3 if you are a licensed researcher.