Hexarelin, also called Examorelin, is a synthetic analogue of ghrelin and is closely related to GHRP-6. In fact, hexarelin and GHRP-6 differ from each other only slightly thanks the addition of two methyl groups to GHRP-6. Hexarelin, like many ghrelin analogues, is orally and sublingually active and highly selective. Hexarelin has been heavily researched for its effects on heart cell survival following ischemia and nutrient deprivation. 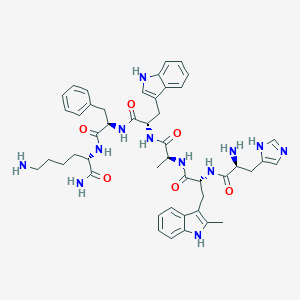