HNI (GnRH) is a decapeptide gonadotropin-releasing hormone agonist. It stimulates the synthesis and release of luteinizing hormone and follicle stimulating hormone. It is used in human medicine to treat infertility, menstrual cycle irregularities, and hypogonadism. It is also used as a diagnostic agent in assessing pituitary function. Ongoing research has found potential uses for HNI in breast and prostate cancer treatment as well as Alzheimer’s disease. 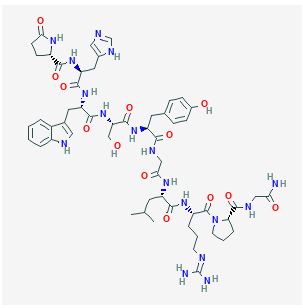 Research suggests that having a higher life-time exposure to estrogen may increase a woman’s chance of developing breast cancer. Women who start their period at a younger age, go through menopause at a later age, take estrogen-containing birth control, or have menopausal hormone replacement therapy all have a higher risk of developing breast cancer. Thankfully, in the case of birth control, the risk diminishes when the pills are no longer taken and eventually the increased risk returns to baseline. Of course, birth control is a double-edged sword because even though its use increases risk of breast cancer, it decreases risk of ovarian cancer.

Some breast cancer cells require estrogen to grow and minimizing estrogen production or blocking estrogen receptors has long been an established method for treating certain forms of breast cancer. Research into HNI shows that it can be used to suppress ovarian production of estrogen and that this may be a means of preventing breast cancer in the first place. This concept is based on the idea that some women, due to genetic and environmental factors, are at higher risk of developing breast cancer in their postmenopausal years. The use of HNI in this setting is safe and cost-effective, making it an attractive means of reducing cancer burden[1]. Research suggests that using HNI for 10 years could reduce the risk of breast cancer by as much as 50% and that using it for 15 years could reduce risk by 70%.

The benefits of HNI do not stop at breast cancer prevention, however, Research indicates that adjuvant therapy with anti-estrogens reduces disease progression by as much as 50% in cases where cancer is sensitive to estrogen. Unfortunately, currently available treatments are limited in their efficacy because cancer cells tend to develop resistance to them over time. This resistance usually arises as a result of increased estrogen receptor expression, making it impossible to block every estrogen receptor without severe side effects. HNI could circumvent this problem by reducing estrogen expression in the first place. This would not only directly reduce growth of estrogen-sensitive cancer, it would boost the efficacy of receptor blocking medications and extend their useful lifespan.

Research in postmenopausal women with hyperandrogenism (too much estrogen) has revealed that long-term GnRH treatment reduces overall levels of estrogen and thus the risk of developing breast cancer. It does so without serious side effects and thus offers an alternative to the current therapy, which is surgical removal of the ovaries.

HNI a Breakthrough in Prostate Cancer

Despite what we are led to believe by popular media, prostate cancer is actually the most hormone-sensitive of all cancers. This may seem problematic, but it actually represents an opportunity for intervention. In short, by cutting off the supply of testosterone and its derivatives to prostate cancer, it is possible to dramatically slow growth and even halt it altogether. The challenge, of course, is to cut off all hormone flow. This led initially to the surgical removal of the testicles in men with aggressive prostate cancer, a procedure that was quickly replaced by HNI administration when it was found to be just as effective and, potentially, reversible.

The use of GnRH in men suffering from prostate cancer began as far back as 1979 and was referred to as medical castration. This mode of treatment eventually led to an interesting finding, however, which is that some androgens are made locally in the prostate via a mechanism called intracrinology. This, of course, means that GnRH blockade is only partially effective in treating prostate cancer. With the help of HNI , scientists were able to develop two new drugs that have been accepted by the FDA for the treatment of castration-resistant prostate cancer (CRPC). This drugs have are highly important and offer a new line of defense against prostate cancer progression and metastasis. They may even eventually find use as preventatives in older men.

The use of both HNI and newer, localized drugs in the treatment of prostate cancer is referred to as combined androgen blockage (CAB). When combined with effective screening and early detection, CAB is one of the few therapies in the realm of oncology to offer a cure – not just remission, but a cure. When used effectively and combined with early detection, CAB makes it possible to cure 99% of all prostate cancer. 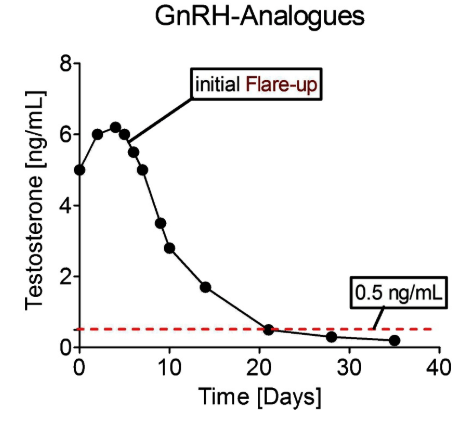 Research indicates that sex hormones, particularly leuteinizing hormone (LH), act on the brain in ways that are well outside the scope of sexual dimorphism or reproductive capacity. In fact, the associated rise in LH that occurs with menopause has been correlated with an increased incidence of Alzheimer’s disease and decreased memory performance in both humans and animals. Careful research in rats further reveals that LH acts directly on the hippocampus, the primary memory center in the brain. Rats given LH exhibit decreased memory performance and hippocampus dysfunction, a deficit that is reverse by administration of an LH blocking drug.

Further research on LH has revealed that higher levels of the hormone are associated with increased neuropathology. In particular, it has been revealed that LH promotes the development of plaques associated with Alzheimer’s. It stands to reason then that reducing LH levels may help to reduce the progression of Alzheimer’s disease. This has been born out, at least partially, in mouse models showing that getting rid of the LH receptor in the brain improves amyloid pathology and helps to preserve the health of cells like astrocytes, which support and protect neurons.

As it turns out, testosterone is beneficial to brain health and actually helps to preserve cognitive function. Thus, simply blocking the entire hypothalamic-pituitary-gondal axis is not necessarily an effective means of treating Alzheimer’s disease. That is why scientists have set out to test HNI derivatives to discern if selective interference in LH production is possible and can have potential benefits. This research, while ongoing, has led to the understanding that leuprolide (a common medication used to treat uterine fibroids and a GnRH receptor agonist) is effective in decreasing the risk of Alzhimer’s compared to other HNI analogues. Ongoing research can help to define why this is the case, but it is important to note that men looking to use highly effective CAB treatment against prostate cancer need not choose between cancer and Alzheimer’s disease. Leuprolide can be used in this setting to offset the risks of CAB with regard to Alzheimer’s disease. In particular, the ability of leuprolide to down-regulate levels of serum gonadotrophins (LH in particular) is generally enough to offset the effects of reduced testosterone.

New research is seeking to understand how HNI  and its analogues affect APOE and MS4A6A expression in Alzheimer’s disease. Both genetic loci are associated with late-onset Alzheimer’s disease, but research suggests that they need to operate in tandem to produce serious problems and that interfering with one gene loci or the other is enough to short-circuit the pathway to pathology. HNI affects this process of tandem interaction, but it isn’t clear how or why. Right now, researchers are working to understand how the interaction of genes in Alzheimer’s disease can be interrupted to both treat and prevent the condition. HNI is am important peptide in that research.

HNI is hardly a new peptide in the treatment of human and mammalian disease, but researchers are constantly uncovering new ways in which GnRH and GnRH analogues operate in both normal physiology as well as the development of disease. The discovery that HNI can play a role in treating prostate cancer was a breakthrough that has allowed doctors to develop a cure so effective that fully 99% of people with prostate cancer can be cured if the disease is caught early enough. It looks like similar breakthroughs are one the horizon with the finding the HNI and its down-stream hormones are substantial players in the pathways that lead to Alzheimer’s disease risk.

HNI exhibits minimal side effects, low oral and excellent subcutaneous bioavailability in mice. Per kg dosage in mice does not scale to humans. HNI for sale at Peptide Sciences is limited to educational and scientific research only, not for human consumption. Only buy HNI if you are a licensed researcher.