ACE-031 is a soluble form of the type IIB activin receptor (ACVR2B), which is a potent regulator of muscle growth in vivo. Myostatin, a negative regulator of muscle growth, is bound by ACVR2B and subsequently inactivated. Research in mouse models shows that knocking out the activin receptor boosts mass in all muscle cells. As a result of this connection, ACE-031 has been investigated in several clinical trials as a potential treatment for muscle-wasting diseases like Duchenne muscular dystrophy (DMD). Activin receptors also play important roles in the development of gametocytes, particularly sperm. The receptor is also often found to be inactivated in prostate cancer and is damaged or dysfunctional in several different types of colorectal cancer.

ACE-031 is a soluble form of the activin type IIB receptor and is known to bind to myostatin and neutralize its effects. Myostatin is a protein, produced by muscle cells, that inhibits both hypertrophy and hyperplasia of skeletal muscle. ACE-031 also likely has effects on bone metabolism, fat storage, and the health of sperm.

ACE-031 was tested in a small clinical trial to determine if it could help to maintain muscle mass in postmenopausal, healthy women. Maintaining muscle is critical to long-term bone health and helps to reduce the rate of joint injuries, falls, etc. in both men and women as they age. In a small placebo-controlled trial, ACE-031 produced significant increases in both lean body mass and thigh muscle volume after just a single dose. Results were observed 29 days after the injection. The study was particularly interesting because a secondary, unexpected outcome was observed. Trials participants receiving ACE-031 showed improvement in serum biomarkers of both bone and fat metabolism. This suggests that ACE-031, while primarily associated with muscle growth, likely inhibits fat storage and boosts bone production.

ACE-031 May Be Necessary for Maximum Muscle Cell Growth

Research in mice indicates that maximal skeletal muscle growth can only be attained with a myostatin inhibitor like ACE-031. Furthermore, it appears that blockade of myostatin by multiple avenues is most beneficial. While these findings are preliminary, they suggest that maximum muscle protection in muscle-wasting conditions might require a multifaceted approach utilizing therapies that both boost growth (growth hormone, IGF-1) and reduce muscle wasting (ACE-031).

Research in mice suggests that myostatin may negatively affect muscle energy metabolism. In other words, too much myostatin leads to extreme muscle fatigue. Blocking the effects of the natural version of ACE-031 in mice leads to elevated serum lactate levels and severe metabolic damage to muscles. It also leads to reduction in the number of blood vessels serving muscle tissue. Supplementing with ACE-031 there not only promotes muscle growth via inhibition of myostatin, it also improves oxidative capacity of muscle, which protects against fatigue and the negative effects of free radical production.

There appears to be more to the ability of ACE-031 to improve muscle function than inhibition of myostatin. Research in mice indicates that ACE-031 can improve force-generating capacity in muscle tissue, in part by preserving energy supply and shifting muscle thermodynamics toward oxidative respiration. In the mice, administration of ACE-031 improved maximum and total contractile force by 40% and 25% respectively. There was no overall change in fatigue of muscle though, indicating that ACE-031 improves muscle strength without affecting energy dynamics. The research revealed no changes in ATP homeostasis or contractile efficiency.

Duchenne muscular dystrophy (DMD) is an x-linked recessive condition characterized by severe muscle loss. It generally leads to an inability to walk by age 12 with muscles that are lacking in protein content but that are exceptionally high in fat content. Due to a dysfunctional dystrophin protein, muscle cells in DMD are weak and prone to damage. Though this is the primary cause of the disease, a secondary effect occurs when myostatin leaks from damaged muscle cells and slows or inhibits growth in other cells. Gene therapy to address the dystrophin dysfunction has so far proved untenable, but there is currently hope that ACE-031 can slow the muscle damage by reducing the secondary impact caused by myostatin.

In a recent clinical trial, subcutaneous injection of ACE-031 every 2-4 weeks resulted in a trend toward maintenance of the 6-minute walk test, indicating that the peptide preserves muscle function. There was also a trend toward increased lean body mass, improve bone mineral density, and reduced fat mass. These latter two findings correlate well with other studies of ACE-031 that suggest it has positive effects on bone and fat metabolism.

In a mouse model of DMD, ACE-031 was administered just once per week for seven weeks. At the end of the trial, the mice receiving ACE-031 had significantly increased total body and muscle weight as well as improved bone mineral density. The latter effect appears to be a result of decreased numbers of osteoclasts, cells responsible for breaking down bone. The increased mass wasn’t simply incidental either, strength testing indicates that the enhanced mineralization improved the biomechanics of the bone and boosted both the maximum force the bones could tolerate as well as the stiffness of the bones.

Though the trial was designed to investigate muscle effects of ACE-031 and yielded very positive results in this primary outcome measure, the team was smart to follow up on the observed bone effects as well. These effects have been observed in trials before, but never objectively measured. This trial puts numbers to the observations, showing that ACE-031 increased bone mass by upwards of 30% in the treated mice. This suggests that the molecule should be explored as a potential treatment for osteoporosis. The fact that it boosts muscle strength and bone density while reducing fat deposits makes ACE-031 a very tantalizing molecule to explore for treating the physiologic effects of aging.

That ACE-031 has unique effects on bone that are separate from its effects on muscle was confirmed in another mouse trial in which mice were given either ACE-031, a strict myostatin inhibitor, or placebo. Results showed that while ACE-031 and the myostatin inhibitor both boosted muscle mass, only ACE-031 improved bone density. The results were substantial as well, with a 132% increase in bone density in the femur (a bone prone to damage in elderly populations) and a 27% increase in density in vertebrae. These findings of course suggest that ACE-031 is binding to something in addition to myostatin.

Cancer and chemotherapy are both contributors to muscle loss. Research shows that both activate signaling pathways that lead to muscle cell death and necrosis. Both conditions also lead to changes in oxidative respiration, which puts metabolic stress on muscle cells. These negative effects are in addition to the increased production of free radicals that both cancer and chemotherapy cause, an indirect cause of muscle damage.

Treatment with ACE-031 in cell culture models prevents activation of the ERK1/2 pathway in muscle cells, which prevents muscle fiber atrophy via programmed cell death. As discussed above, ACE-031 also preserves mitochondrial function in muscles and boosts muscle fiber energy efficiency. This, of course, helps to offset the negative metabolic effects of cancer and chemotherapy by improving energy usage in a setting of scant nutrition when the body robs Peter to pay Paul. Improved energy usage also reduces the number of free radicals that are generated during metabolism. Researchers have called for testing ACE-031 in combination with anticancer drugs to determine how effective the combination can be in preventing chemotherapy-induced muscle atrophy.

It is important to note as well that some cancers produce myostatin themselves and that ACE-031 is a potential treatment for preventing muscle wasting in this setting. Research in cell culture shows that ACE-031 prevents muscle cell wasting via myostatin. Cancer cells appear to have several direct effects on muscle function, including inactivation of the natural version of ACE-031 as well as reducing the number of mitochondria (and thus energy production) in muscle cells. 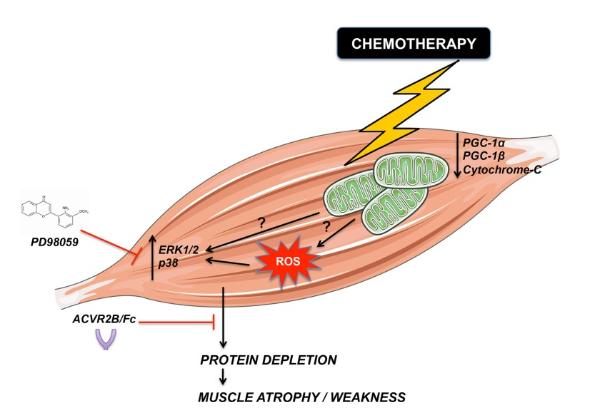 The benefits of ACE-031 in cancer are not strictly related to muscle composition, strength, and lean body mass. It is clear that reducing muscle loss in the setting of cancer and cancer treatment prolongs lifespan markedly. Additionally, inactivating myostatin in the setting of cancer improves insulin sensitivity, reduces fat deposition (lipodystrophy), reduces inflammation, and boosts both bone strength and rates of healing following fracture.

ACE-031 exhibits minimal side effects, low oral and excellent subcutaneous bioavailability in mice. Per kg dosage in mice does not scale to humans. ACE-031 for sale at Peptide Sciences is limited to educational and scientific research only, not for human consumption. Only buy ACE-031 if you are a licensed researcher.